Before the Gram Panchayat elections, the Gram Rakshak Dal, Home Guard will also be fully flagged.
The Gujarat Government will organize recruitment in the next 100 days for 27,847 posts ranging from Constable to Sub-Inspector-PSI in the Police Cadre under the State Home Department. Earlier on Monday, the chairman of the Lok Rakshak Dal Recruitment Board had tweeted that the youths, who had been preparing for jobs in the police for years, were likely to undergo a physical test in November after Diwali. 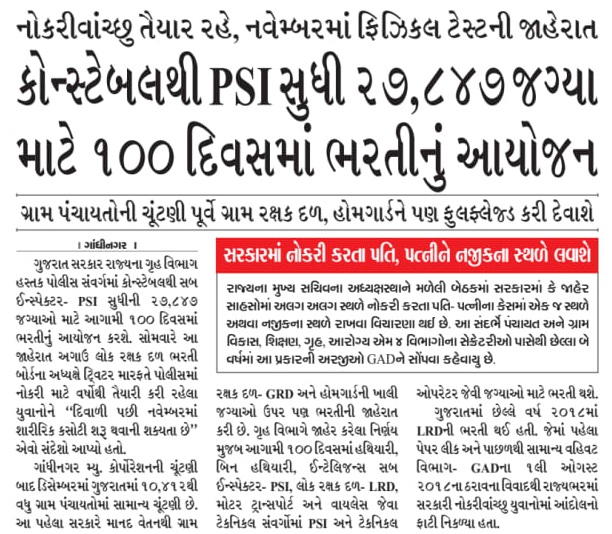 After the Gandhinagar Municipal Corporation elections, there are general elections in more than 10,412 gram panchayats in Gujarat in December. Earlier, the government had also announced recruitment for Gram Rakshak Dal - GRD and Home Guard vacancies from Ma Nad Nadan. As per the decision announced by the Home Department, in the next 100 days, recruitment will be done for posts like PSI and Technical Operator in technical cadres like Weapons, Non-Weapons, Intelligence Sub-Inspector-PSI, Lok Rakshak Dal-GRD, Motor Transport and Wireless.

LRD was last recruited in Gujarat in the year 2018. The first paper leak and later the controversy over the resolution of 1st August 2018 of the General Administration Department-GAD sparked agitation among the youth seeking government jobs across the state.
In the meeting chaired by the Chief Secretary of State, it has been considered to keep the spouses working in different places in the government or in public enterprises in the same place or in the same place. In this regard, the secretaries of Panchayat and Rural Development, Education, Home, Health M4 departments have been asked to submit such applications to GAD in the last two years.